The Girl Who Ignored Ghosts by K.C. Tansley 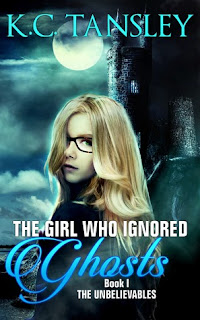 Kat Preston doesn’t believe in ghosts. Not because she’s never seen one, but because she saw one too many. Refusing to believe is the only way to protect herself from the ghost that tried to steal her life. Kat’s disbelief keeps her safe until her junior year at McTernan Academy, when a research project for an eccentric teacher takes her to a tiny, private island off the coast of Connecticut.

The site of a grisly mystery, the Isle of Acacia is no place for a girl who ignores ghosts, but the ghosts leave Kat little choice. Accompanied by her research partner, Evan Kingsley, she investigates the disappearance of Cassie Mallory and Sebastian Radcliffe on their wedding night in 1886. Evan’s scientific approach to everything leaves Kat on her own to confront a host of unbelievables: ancestral curses, powerful spells, and her strange connection to the ghosts that haunt Castle Creighton.

But that’s all before Kat’s yanked through a magic portal and Evan follows her. When the two of them awaken 129 years in the past with their souls trapped inside the bodies of two wedding guests, everything changes. Together, Kat and Evan race to stop the wedding-night murders and find a way back to their own time—and their own bodies—before their souls slip away forever. @goodreads


Read from May 20 to 22, 2015
I would like to thank Netgalley and Beckett Publishing Group for giving me the opportunity to read this ARC.

I liked the book, I thought it was a good ghost story. It's not really creepy or anything, some of the ideas are creepy, like ghosts taking over your body for good, but that's about it.

Every since Kat was a child she could see ghosts, they rocked her in her cradle, sang her to sleep, became friends with her. Until... one day she finds a very creepy ghost around her all of the time and she starts missing chunks out of her day. Another ghost named Toria comes to her and says this ghost is trying to take over her body. Well as you can imagine, this freaks Kat out, but Toria says she will help her get rid of her. I won't go on about all of that, I will just say it worked.

Years later.. she is on a project with her class to go to Castle Creighton in CT to try to find out what happened many years ago. There seems to be a curse on the family and all of the children die at some point. There is one heir left, Joshua Radcliffe and they are going to see if they can find the curse and help him out. The group includes, Morgan, Kat's best friend, Seth and their TA, Evan.

It turns out Kat can't seem to fight all of the ghosts in this castle and they find her again. She finds Toria again, whom she loved and wanted to see again anyway. It turns out Toria and the evil ghost, Leanna is involved in the castle business.

Kat and Evan get pulled into a mirror that takes them back to the time frame of the first murders and they have to solve the crime. This they succeed in doing after coming back through the portal with the help of Toria, their friends, and the Radcliffe's.

I thought it to over all to be a very good little ghost story with some good characters and background.
4 Stars

Posted by Melissa Dog/Wolf Lover Martin at 8:16 AM 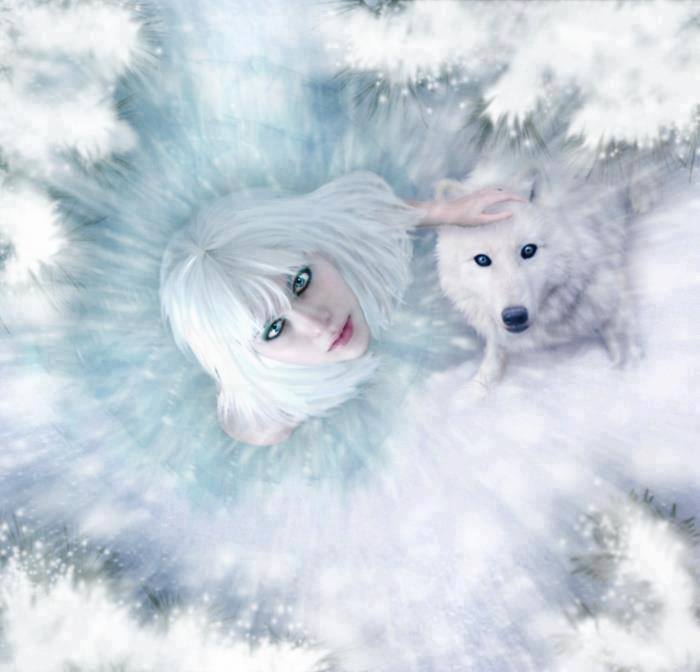 I've taken off most of my follow me pages as there have been hackers to Netgalley & other places. It's a sad world after all.

For the love of all that's Holy, this special edition box of Daughter of Smoke and Bone is fanfreakingtastic! Follow me...   1. First we... 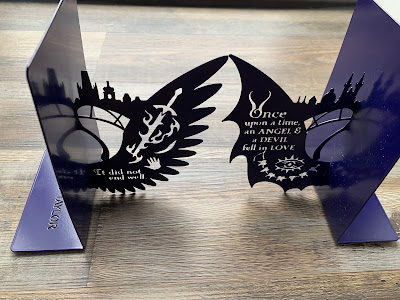