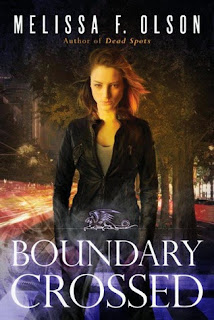 After her twin sister’s brutal murder, former US Army Sergeant Allison “Lex” Luther vowed to protect her niece, Charlie. So when two vampires try to kidnap the baby, it quickly turns into a fight to the death—Lex’s death, that is.
She wakes up to two shocking discoveries: she has miraculously survived the fight, and baby Charlie is a “null,” gifted with the ability to weaken supernatural forces...and a target for creatures who want to control that power. Determined to guarantee her niece’s safety, Lex makes a deal with the local vampires. She sets out with the mysterious—and undead—“fixer” Quinn to track down whoever’s responsible for the kidnapping, sharpening her newfound magic skills along the way. But the closer she gets to the truth, the more dangerous her powers become.
Boundary Crossed is a dark, thrilling journey into a world where the line between living and dead isn’t nearly as solid as it appears... @ goodreads

I really enjoyed this book. I loved the character Lex. She is a former US Army Sergeant and a boundary witch. She has no idea she is a witch until she is attacked by a couple of vampires that are trying to kidnap her little niece. This attack led her to be in the hospital where she meets another witch and a vampire who start filling her in on what she is, of course blowing her away.

She has to go and meet with the head vampire and make a deal to keep her niece safe as there will be more beings trying to kidnap her because she is a null. They explain to her that a null is someone that can drain power. Example: If a vamp is close to her, well carrying her since she's only one, they can actually walk in the sunlight, wolves wouldn't have to change on the full moon, etc.

So with the help of some other witches they start training her on how to use her powers. She also has a great vampire friend she meets because of this named Quinn. He is a love interest, but that isn't really dwelled upon in this book.

They have a few good battles and learn some really cool things.

I think Lex is awesome. She has a menagerie of adopted animals, she's bad to the bone and she has a little snark and don't put up with much from anyone. She doesn't whine or go on about things, she just gets it done.

A great book and I hope there is going to be more because I want to see what could happen next!

Posted by Melissa Dog/Wolf Lover Martin at 9:36 AM