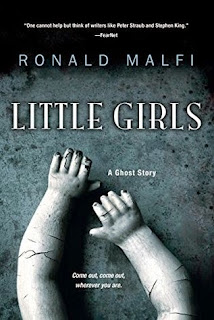 From Bram Stoker Award nominee Ronald Malfi comes a brilliantly chilling novel of childhood revisited, memories resurrected, and fears reborn… When Laurie was a little girl, she was forbidden to enter the room at the top of the stairs. It was one of many rules imposed by her cold, distant father. Now, in a final act of desperation, her father has exorcised his demons. But when Laurie returns to claim the estate with her husband and ten-year-old daughter, it’s as if the past refuses to die. She feels it lurking in the broken moldings, sees it staring from an empty picture frame, hears it laughing in the moldy greenhouse deep in the woods…
At first, Laurie thinks she’s imagining things. But when she meets her daughter’s new playmate, Abigail, she can’t help but notice her uncanny resemblance to another little girl who used to live next door. Who died next door. With each passing day, Laurie’s uneasiness grows stronger, her thoughts more disturbing. Like her father, is she slowly losing her mind? Or is something truly unspeakable happening to those sweet little girls? @ goodreads

I would like to thank Netgalley and Kensington books for an ARC reading of this book.

I have read a few of this author's books and they are just creepy.

I was thinking this book was going to be about little girls creeping around which would have freaked me out because anything with little kids in horror books just gives me the heebie jeebies. That being said, there is really only one creepy little girl in this book. Who is she really? She reminds Laura of a little girl from her childhood that was wackadoo. But... there is a real reason for her being that way, which I'm not going to tell you!

Laura, Ted and their 10 year-old daughter Susan move temporarily into Laura's father's house when he commits suicide. Laura just wants to get in there, get stuff sold and get the house sold.

A creepy little girl named Abigail starts creeping around to play with their daughter Susan. Laura doesn't like this one bit but Ted, the all knowing man, thinks it's just fine. Goes to show what he knows at the end of the book, but I digress!

So all of this really bad stuff comes to light when Laura finds some things in the well on their property. Lets just say, I never saw that coming.

This is a well thought out book with a good storyline. I look forward to reading more from this author and reading some of his older stuff.  3 Stars

Posted by Melissa Dog/Wolf Lover Martin at 11:23 AM