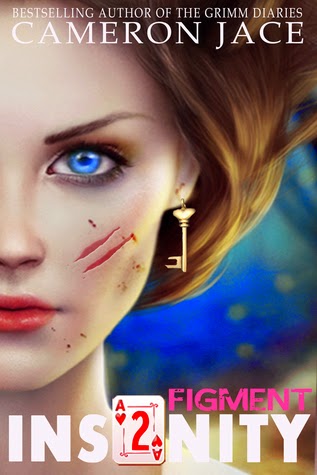 After her encounter with the Cheshire Cat, Alice Wonder can hardly tell reality from imagination. But when kids have their head chopped off and stuffed in watermelons all over the city, it's clear that another Wonderland Monster has arrived, possibly scarier than the Cheshire. Alice, along with Professor Pillar, have to solve the killer's puzzles before a horrible event threatens the death of millions. Then Jack Diamonds appears again. This time, Alice must know who he really is.

The author takes you on a crazy trip through madness!

Alice and Pillar are still living in the asylum but run around trying to stop Cheshire and now The Muffin Man. They get into some gross stuff!

Off with their heads is involved, among other things. I feel like I'm going mad at times with all of the cool, crazy things going on! The scene in the morgue was pretty creepy. The take down of The Muffin Man was ick and his back story is very sad. Alice wanted to help him but sometimes you can't.

We find out the deal about Jack, very sad :-(

Another great book in the series! 4 Stars


Posted by Melissa Dog/Wolf Lover Martin at 6:20 AM