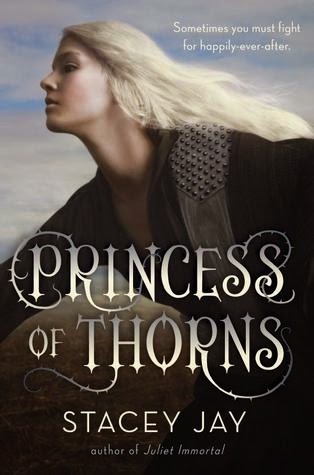 Game of Thrones meets the Grimm's fairy tales in this twisted, fast-paced romantic fantasy-adventure about Sleeping Beauty's daughter, a warrior princess who must fight to reclaim her throne.

Though she looks like a mere mortal, Princess Aurora is a fairy blessed with enhanced strength, bravery, and mercy yet cursed to destroy the free will of any male who kisses her. Disguised as a boy, she enlists the help of the handsome but also cursed Prince Niklaas to fight legions of evil and free her brother from the ogre queen who stole Aurora's throne ten years ago.

Will Aurora triumph over evil and reach her brother before it's too late? Can Aurora and Niklaas break the curses that will otherwise forever keep them from finding their one true love?


Read from March 21 to 27, 2015
I thought this story was great. The only problem I had was I wanted to smack Aurora and Niklaas through out the whole book, especially at the end. It's like get over it and get on with it. Other than that, I loved the story line. When Aurora had her powers from being fairy blessed, she was bad to the bone.

Aurora is trying to find an army to help save her brother Jor and fight the evil Ogre Queen Ekeeta. Jor is a prisoner of Ekeeta and being tortured to try to find Aurora.

She picks Niklaas up along the way and finds out he wants to marry Aurora so it will break the curse he has on him that will happen on his 18th birthday. He has no idea that he is traveling with Aurora because she is disguised as a boy, her brother Jor actually. It was confusing at first. I had to get used to them referring to her as a boy. And she also tells him to call her Ror for short so it's a little crazy.

Aurora and Niklaas spend some time together traveling and grow very fond of each other. He starts to care about Aurora as a brother. Aurora starts to have feelings for him but knows it won't work out. If she kisses someone it makes them lose themselves and become a slave to her.

Needless to say, there are some evilness going on, a little fighting, a few surprises that turn things totally around that I wasn't expecting. But it all turns out in the end. I really did enjoy the book.
5 Stars